Braveheart Bio-Dog Academy boasts its own research unit and specialized laboratory, headed by owner John Greyvenstein, who holds a BSc (Zoology) (Hons) and an MSc in Genetics. His MSc thesis was dedicated to Working Dogs.

The research unit made a significant breakthrough during the first half of 2005 in the detection of narcotics and explosives by sniffer dogs, making the process much more accurate while avoiding potentially dangerous side effects for both Handler and Dog.

The Braveheart Bio-Dog Academy team developed training aids that contain a small amount of the vapour of a target substance. Dangerous substances like explosives and narcotics are tamed in the process because of the techniques applied (which adhere to the requirements of the Chief Inspector of Explosives as well as those of the Medicines Control Board).

The aids are not dangerous to either trainer or dog, and cannot be abused by anybody. With proper precautions they can also easily be protected against contamination, and be stored securely.

During trial runs internationally, resounding success was achieved with both the preparing and testing of training material, and the training and assessing of dogs and handlers.

The new technique was successfully demonstrated during an Open Day at Braveheart Bio-Dog Academy on 10 June 2005 – using narcotics detection dogs that had been trained for less than two weeks.

Research is done on a continuous basis, and the next significant breakthrough was announced during the second half of 2013, when Braveheart Bio-Dog Academy trainers show-cased the ability of specialized dogs and handlers to detect the so-called Mother of Satan explosives that up to then could escape detection by security equipment and sniffer dogs alike at entry ports such as airports, because it contained no metal whatsoever. These explosives have already been used against passenger aircraft with devastating results. They were also used in the London Underground and Bus Service as well as other suicide attacks, resulting in many deaths.

Braveheart In The News

In 2014, exactly a year later, Braveheart Bio-Dog Academy showed the sophistication reached by their training methods and aids for narcotics detection, when their handlers demonstrated the skills of narcotics detection dogs they had just finished training on behalf of international clients at an Open Day for the international media – taking the fight head-on to the scourge of international drug trafficking, and all its horrific consequences for individuals and well as the security of governments and countries.

A foreign government recently requested Braveheart Bio-Dog Academy to train dogs and handlers to sniff out ecologically important products.  Braveheart Bio-Dog Academy first did comprehensive research, and then developed a series of techniques and training aids in their laboratory that could be used to train the requested dogs and handlers, with a minimum of false indications (a world first). Products which play an important role in the specific country’s economy, and that are very important regarding import and export include, amongst other things: 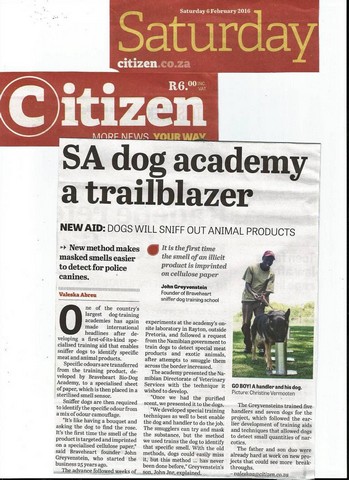 The breakthrough in the application of sniffer dogs has also opened up significant new career opportunities in specialised dog handling for both private security firms who want to have their officers trained for narcotics and explosives detection making use of sniffer dogs, and for private individuals who want to follow a lucrative career in specialized dog handling after obtaining their DH5 certification, like the announcement regarding narcotics and explosives detection mentioned earlier.

The Research Unit has also successfully patented a unique kennelling system, scientifically designed, developed and tested to enhance the comfort of the dog and simplify the task of its minder, while representing a significant cost saving.

A scientifically balanced self-feeder unit for dogs has also been successfully developed and tested, and is in full commercial use.

Braveheart Bio-Dog Academy’s research unit is constantly working on projects relevant to the dog-related security industry, and more breakthroughs are always in the pipeline.